ALBARELLI FOR ALL SORES

The albarelli will travel

First stop at De Coöperatieve - Hasselt (BE)
From 18 till 21 April 2014
www.valerietraan.be

In his early twenties Johan Tahon dug up in the center of Ghent a majolica milk jug. It proved to be an important discovery: it was made by the Antwerp ceramist of Italian descent Guido Andries. Andries introduced majolica in the Netherlands and in 1520 put up a kiln in the Kammenstraat, not far from where gallery Valerie Traan is now located. This accidental discovery lead to Tahon's collection of pre-Renaissance pottery and to a growing fascination with the archetypal uses of pottery.
A quarter century later Johan Tahon is the best known Flemish sculptor with his famous white sculptures. In Galerie Valerie Traan he shows for the first time his versions of the albarello, or pharmacist's pot, capriciously covered with white enamel. These ointment jars with their healing powers and their ancient utilitarian shape mean a lot to Tahon. He doesn't consider these hand-molded pots to be ready-made objects, but sees them as modern variants on ancient forms that have survived over time. 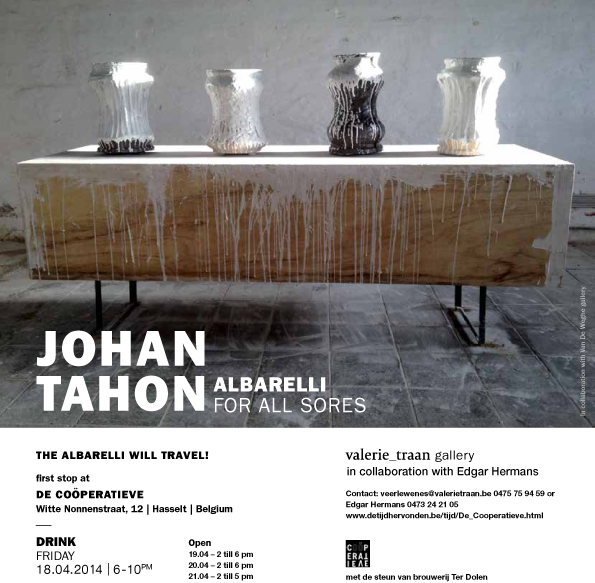