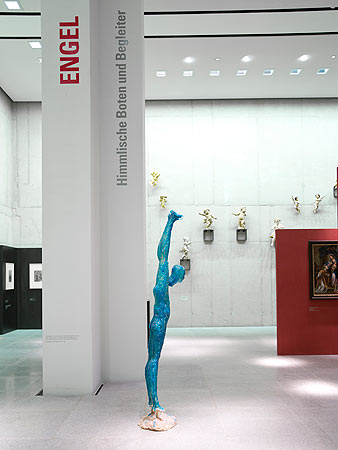 In the exhibition Engel: Himmlische Boten und Begleiter the Museum am Dom in Würzburg, thematises the way angels have been presented in art over the centuries. Winged creatures were already known to the Babylonians, but only in the Bible they were called angels, from the Greek angelos, which means messenger; angels are the messengers of God, they are mediators between heaven and earth. In Christian art the angel iconography grew explosively and up to now the angel is still a source of inspiration for artists.

In this exhibition Johan Tahon's Blue Angel will be shown, a polyester sculpture from 2002, that is part of the museum collection. The bright blue color of this figure is a reference to the alchemical Hermes, the messenger of the gods. The figure is directed at both heaven and earth, it finds itself in an in-between and functions as an angel.